The lighthouse project "EVOLOPRO" addresses one of the central challenges of "Industry 4.0". This is to give production systems the ability to autonomously adapt to new requirements and environmental conditions. To this end, the EVOLOPRO consortium is investigating how evolutionary mechanisms and principles that ensure the adaptability of organisms in nature can be transferred to production systems. The lead project is part of the Fraunhofer initiative "biological transformation".

EVOLOPRO builds on existing production processes and achievements of digitization and continues their further development. The research and development agenda is strongly driven by findings from biology, which show that that the facilitation of variation and the tolerance of errors are crucial mechanisms in nature to achieve adaptability. In EVOLOPRO's understanding, manufacturing defects are thus not seen as waste, but, in analogy to nature, as a valuable resource for the adaptation and improvement of technical systems and processes.

The successful implementation of the EVOLOPRO agenda requires algorithmic and IT development efforts. Comprehensive digital representations of products and process chains, the mapping of requirement profiles and a reliable, high-performance information cycle between the digital and physical world are essential. Therefore, the development of powerful digital twins and digital environments is one of EVOLOPRO's central concerns. In addition, algorithms must be developed that orchestrate the interaction between the digital environment and digital twins and thus control the adaptation processes in the production processes.

The algorithms to be developed play a key role in the implementation of biologically inspired adaptation mechanisms. Fraunhofer SCAI is in charge of algorithm development in EVOLOPRO, which is at the interface of transfer learning, multitask learning, evolutionary exploration strategies and multi-fidelity modelling.

Three different pilot applications will validate the effectiveness of EVOLOPRO's approaches: the single component (production of a blade integrated disk), the assembly of several single components (production and assembly of a free-form optical system) as well as the temporary interaction of several single components (production of a hood in interaction with the additive correction of a folding jaw using a welding robot). Real products with high economic relevance for the Fraunhofer-Gesellschaft serve as demonstrators. The aim is to generically explore the EVOLOPRO concept of evolutionary self-optimization and to demonstrate its broad applicability with the selected pilot types and pilot chains.

Fraunhofer SCAI develops methods to explore large solution spaces and search for the most adaptive solution. 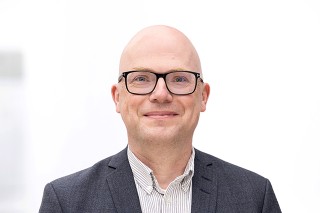