In order to understand effects of inhalable substances in the lung, it is reasonable to investigate these substances using biological models. Until recently tests for this purpose had to be performed mainly in-vivo with experimental animals. Due to ethical and political, but also scientific reasons, alternative in-vitro test methods are of increasing importance.

At the Fraunhofer Institute ITEM, a testing procedure based on an air-liquid interface culture technology (P.R.I.T.® ExpoCube®) was developed for this purpose. In cooperation with Fraunhofer SCAI this in-vitro testing procedure was revised by applying Computational Fluid Dynamics (CFD) for the layout of the aerosol conduction, the liquid supply system and an aerosol sampling box.

The aim of the study was to characterize and improve the deposited amount of test aerosols on the cultured human cells, to enhance the supply of nutrient in the liquid zone of the cell cultures and furthermore to increase the amount of aerosols extracted from a sampling box.

For this purpose commercial CFD software was applied in which the air-transported aerosols were regarded as solid particles in a Lagrangian frame of reference. Due to the partially submicronic size of the particles, Brownian motion, a Cunningham correction for the drag and thermophoretic forces were considered where required. In the liquid phase the flow through the duct system was analyzed and modified regarding pressure limits for the cells, an equal distribution of the fluid, capabilities for fast and efficient purging of the system and the possibility to flush out air bubbles.

Watch an Animation of a CFD Simulation 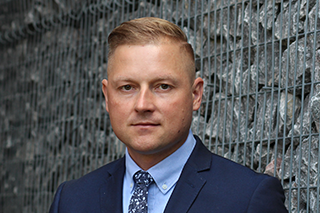